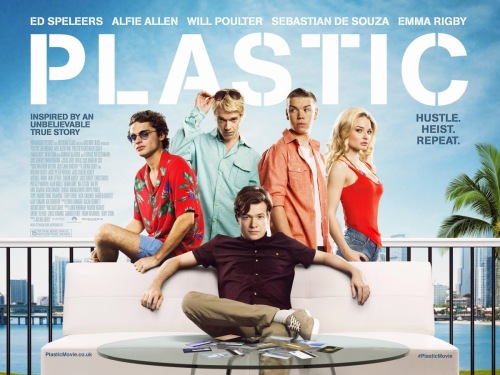 Today sees the UK theatrical release of heist thriller Plastic. Directed by Julian Gilbey and produced by Terry Stone, the film is based on a true story of a group of university students supplementing their loans with credit card fraud, suddenly finding themselves in need of £5m to get a gangster and the threat of violence off their backs.

Got to say, I’m pretty darn proud to have been in the sound team on this film, coming out of the re-recording theatre, we were all pretty chuffed with the final mix. It’s loud (where needs be) and proud. The Foley sat in nicely, some spot-on recordings by Universal Sound, and got featured nicely in the mix. Mmmm.

Last year I started to be more active in assisting Alex in the hard FX side of our films. Mostly helping out with doors and cars. The doors I love, the cars less so. There’s so much faffing around trying to get the right sound out of a multitude of different library tracks and complimentary elements (animals, tyre squeals, gravel crunch, machinery and miscellaneous sounds in the library named ‘track 01’). Nonetheless, Plastic proved a really thrill to assist on the FX because everything needed a bit of beef and creative attention. It felt good to step up and assist on the more literal parts leaving Alex to get on with his design and the scenes requiring a lot of attention. Of which there were many.

The other challenge on this film was my first venture in looking after the VFX, more to the point, looking after the master sound PT session and trying to maintain its structural integrity once the VFX updates have come in. Alex warned me I’d have a task on my hands, turns out he was right. There was lots of liaising with our picture department and the VFX supervisor, then there were spreadsheets. Oh joyous spreadsheets. There’s quite a lot of organisational considerations looking after these VFX. You’ve got to determine which VFX shots will have to be checked out for sync purposes or needing some more effects laying down. Muzzle flashes need double checking in the session in case the gunshot sync has changed, blood spurts need new sound effects adding to compliment the new visuals, iPhones and laptops need new fx laying down if the visuals have changed and the Foley often needs revisiting in case on-screen typing has changed the keyboard tapping sync.

So here’s the trailer for Plastic. It’s our first Paramount release. Not only was the Foley and effects a pleasure to work on, the mix was damn good fun. Julian has such enthusiasm and awareness of sound post and its impact upon the film’s excitement and emotion. This made me extraordinarily happy.

This has definitely not been copied and pasted from an ad I just posted on Gearslutz… no sir.

I’m looking for someone in Los Angeles that’s available on the 23rd and 24th of March to shimmy on down to a hotel and record three lines of ADR.

These recordings are wildtrack lines, not to sync. Any type of recording medium is fine, however a boom mic is required to pick up the lines. These lines will be recorded from the perspective of the actor talking through the hotel room door.

Send me an email (please don’t phone as I’m elbow deep in footsteps regions at the moment, oh Lord how elbow deep I am) if you’re available.

Seeing as this isn’t really about anything other than needing to get a few lines of ADR recorded, here’s a photo which precedes the next post which I’ll write as soon as the film is complete.

Late as ever to the party, but surely it’s never too late to wish one another a wonderful new year full of experiences and adventures; be they work related or in those fleeting hours we call our spare time.

This forthcoming year is filling me with trembly anticipation towards a plethora of new projects to be undertaken both in the (sound) edit and the pits. The thought of treading floorboards makes me so happy I could vomit, however this nausea may also be as a result of some trepidation in developing flat feet and the dreaded rumble tum/bum.

So I’ve decided to wind back the clock to childhood days and take up tap dancing classes.

On the left. I hated that dress.

It makes sense to devote time and energy to footsteps, the more difficult aspect of Foley to master. I remember drilling this into my head when reading Vanessa Theme Ament’s The Foley Grail back in my Radium days, she mentioned how many Foley artists entered the industry with a background in dancing and stage performing, however it was an aversion to hairspray-filled dressing rooms littered with ribbons and eye shadow that kept me away from the dance studio.

I’ve read almost every book by writer and martial arts expert Geoff Thompson. Near the end of last year I re-read an article entitled Armstrong’s Hills where he described pushing himself away from his comfort zone into writing screenplays for film and the stage. His observations into Tour De France champion Lance Armstrong’s training approach gave me an essential kick up the arse. To quote:

I got the idea after reading about Lance Armstrong, the serial Tour de France winner. What inspired me about this great man was not just that he managed to fight cancer against horrendous odds, but also that he went on to win The Tour De France an unprecedented six times. He won it so many times that the organisers of the race actually changed the route (I believe four times) to give the other riders a better chance of winning. What intrigued me was not so much that Lance Armstrong won the race so many times, rather it was the way in which he went about it. He looked at the Tour route and realised that the hardest part of the course, the part that every rider struggled with, was the hills. He realised that if he could master the hills, he could dominate the whole course. So that is what he did. Whilst the other riders concentrated on their flat riding Armstrong was on the hills, up and down again and again and again until he mastered them, until he was comfortable with them, in fact until he loved the hills.

I don’t particularly expect to win the Tour DeFrance, or become a master at footstepping, but the idea of concentrating efforts on the most difficult areas of one’s field, in this case Foley, by getting more acquianted with rhythm and utilising all areas of the feet whilst avoiding the temptation to perfect less challenging and, dare I say, more ‘exciting’ aspects of the art, may offer some relief to the butterflies forming in my stomach region at present.

Aside from finding an excuse to don a tutu and avoid jogging in the evening rain, it will feel good to try and tip my hat towards the legacy of Foley artists who began their careers as professional dancers. Near the close of last year, Alex linked to me a wonderful article by Lionel Selwyn about the UK’s Foley heritage. The photo of the late Beryl ‘The Boot’ Mortimer hard at work in the pits is mesmerising and it’s most humbling to read about how many artists worldwide came into the Foley theatres from… theatres.

And now onto something completely different.

It seems uncouth to maintain all attention on the forthcoming months without taking the time to appreciate the twelve just passed and those that have made 2011 so incredible.

Posted in Foley, Me Me Me, My Family is Concerned, Wasting Time

To sync or not to sync? That was the question.

When a cut dramatically changes the pace of a character’s movement or creates and stutter/delay in their forthcoming footstep, what does one do? Continue with the previously established rhythm and hope the viewer doesn’t notice or follow the sync to each hit point regardless of the continuity issue?

I posed this question to supervising sound editor and sound consultant Eddy Joseph, a guest and panel speaker at BAFTA’s Continuity in Film evening back in November.

This was an issue that I had encountered whilst working on a project at the time, it seemed an ideal opportunity to receive an experienced opinion on the matter. The subject was tacked in the brief Q&A at the event in terms of picture editing by Terry Rawlings, however I was curious as to the implications of continuity issues within Foley.

Eddy suggested I blend the old pace into the new, I guess as a house DJ would mix a faster BPM record into a slower one, then subtly increasing the speed back again. The first few steps are best served maintaining rhythm than achieving perfect sync… gradually adjusting to the new walking pace and not distracting from what is actually going on in the story.

It felt a huge relief to be unburdened of an almost obsessive desire to ensure every step and movement is perfectly in time. I recently worked as an assistant Foley editor on Anuvahood and put this blending of rhythm > sync into practice when editing the feet, I noticed a significant difference upon playback in terms of presenting the performance, even when listening/looking out for sync issues.

Has anyone/everyone else had this issue and come to the same conclusion?. Let me know your thoughts.